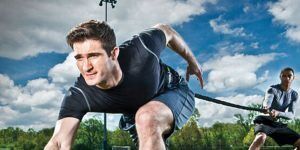 When athletes are faced with an injury, the effects can potentially extend beyond those that are physical in nature. Sometimes they take a toll mentally as well.

Depending on the athlete and the nature or extent of the injury, these mental reactions to injury can include changes in appetite, sleep issues, irritability, depression, a lack of motivation, and even alienation according to a statement published by the American Academy of Orthopaedic Surgeons.

And if they’re excessive, anger and rage may appear, causing the athlete to experience emotional outbursts or have greater struggles with substance abuse issues.

What can you do to help athletes avoid these types of responses and keep pushing forward? Here are tips provided by nine pro sports DCs that work to help their injured athletes stay in the game mentally.

Really Listen to Their Concerns

“I think one of the most important things we as providers can do is listen,” says Jay Greenstein, DC, CCSP, CKTP, CGFI, team provider for the NFL’s Washington Redskins Cheerleaders. “If you are truly listening to what the athlete is saying and evaluating how they’re saying it, you can understand what their true needs are.”

With this, Greenstein stresses that there is always a balance between asking too much and getting to the heart of the matter. There is also an obligation to keep the athletic trainer in the loop. However, if you are authentically curious and really listen to what your athletes have to say, they’re more inclined to trust you. “It’s really about empathy,” Greenstein says.

Help Them See Their Injury for What It Is

“For young athletes, I remind them that what they do today for their body will determine the longevity of their careers,” says Sabrina Atkins, DC, team chiropractor for the NBA’s Orlando Magic and Orlando Ballet. “For the older and more seasoned athletes, there is a gentle reminder that the recovery process takes a little longer,” says Atkins.

Taking this approach helps the athlete become more reassured that they’re “doing the right thing by taking care of the injury and letting it heal,” Atkins says. To help them understand better, she reminds them what it was like when they first got into their sport, the amount of time and energy it took to achieve a level of proficiency and confidence. That’s what will happen with this injury too.

Inform Them the Injury Can Actually Help Them Build Strength

“I talk to them about using the injury as a way to strengthen not only the area that is injured, but everything else,” says Jason T. Levy, DC, ART, CCSP, CKTP, team chiropractor for the New York Jets (NFL), New Jersey Devils (NHL), and New York Red Bulls (MLS). For instance, Levy shares treats a high-level triathlete who blew out her ACL.Yet, after rehabbing, she is way ahead of where she should be.

This is an issue Levy says that he sees in elite athletes, where they are weak in certain areas, but compensate to make up for it. However, rehabbing from an injury gets them to build up those areas instead and, “a lot of times, they come back better than ever,” he says.

Help Them Tap Into Their Personal Power

Another approach that Monte Hessler, DC, CCSP, says works well is helping athletes tap back into the power they felt when they weren’t injured. “It’s important to visualize and feel what it was like when they were at their best,” says Hessler, who is team chiropractor for the Phoenix Suns, PGA Tour chiropractor, and chiropractic consultant for the San Francisco Giants

“It helps if the athlete recalls all of the sensory feelings they had when they were at the top of their game and having fun,” Hessler says. So, he helps remind them how it felt to make that perfect play, who they were with, where they were at the time, and any other details they can recall using the five senses to make those visualizations more real.

Encourage a Focus on Recovery

“Dealing with an unexpected injury can certainly be a challenge to any athlete’s identity whether high school or professional,” says Karen Slota, BS, DC, team chiropractor for the Detroit Lions. “My goal when dealing with athletes and their injuries is to shift their focus away from what they can’t control and towards something they can control – their recovery.”

This involves getting them to concentrate on things like managing inflammation, soft tissue recovery, restoring strength, and improving flexibility. “Luckily for many of my athletes, we have the ability to work with a great team of professionals that all provide their expertise in these areas to reinforce the path of recovery for the athlete,” Slota says.

Remind Them They Aren’t Alone

“Most professional athletes have been on a consistent training program since they were very young,” says Mary Collings, DC, team chiropractor for the NHL’s Dallas Stars and NBA’s Dallas Mavericks. “So, when sidelined by an injury it is very difficult for them to know what to do each day and they feel somewhat ‘left-out’ from the rest of the team.”

To help with this, Collings explains that there is value in reminding them that they aren’t the only one with this type of issue. “I always try to let them know that there is at least one other player out there with the same type of injury with a similar recovery time,” she says adding that, “sometimes when they realize they aren’t alone, it makes it better.”

“For the pro athlete, I want to set realistic expectations to their injury,” says Hirad Najaf Bagy, DC, team chiropractor for the Washington Redskins, Washington Nationals, and D.C. United pro soccer team. “I try to draw a picture for them what their injury is, what science tells us about their recovery, and what it means.”

In addition to setting realistic expectations, Bagy stresses that it’s also important to continually reevaluate. This helps the athlete “wrap their head around their injury,” he says, which can go a long way with keeping them motivated and positive, providing a better recovery as a result.

“From the standpoint of a DC, and without the intervention of a Sports Psychologist, I believe that the most important way to keep the athlete mentally focused and motivated throughout the course of rehabilitation from an injury stems solely from clear and concise communication,” says Beau Daniels, DC, official chiropractor for the Los Angeles Rams.

“Making sure the athlete fully understands their injury, what to expect in the coming weeks, and what to expect regarding a return-to-play timeline is crucial to keep them focused on the growth they need to return to sport,” he says. “Athletes are very in tune with their bodies and unless you take the time to explain to them what they are feeling and how these feelings will change over time, you get a very confused and deflated athlete.”

Above All, Be Honest

“I think the best way that a sports chiropractor can help their athletic patients mentally is just being honest with them,” says Stuart E. Yoss, DC, CCSP, ART, team chiropractor for the Chicago Blackhawks, Bears, and Bulls. “The more you can tell the athlete what to expect also tends to allay any fears that they may have about being injured,” he adds.

Granted, this isn’t always an easy thing to do. “There are times that you will have to tell a patient their season is over or that they will have to miss the big game,” Yoss says. “Those are some of the worst times being a doctor. To see that look in their eyes is rough.”

DoCS is committed to raising the bar in chiropractic for athletes, so if you have any questions or article ideas, please feel free to contact us or share them in the comment section below. Reprints of this article permitted as long as it links back to the DoCS website: www.DoC-Sports.com.